15 members of Forbes Technology Council share their predictions for what will be considered essential features of “good” UX design in the near future.

Raise your hand if you’ve been advocating for some of these features for a LONG TIME. Personally, I’ve been (screaming) asking/begging/demanding:

A focus on the customer journey
Honest to God, the journey does not begin nor end on just the screens a specific team is “responsible for.”

Thorough customer research at the ideation stage
Testing the final product is just too late. Sure, it’s testing, but I think we all know how this will end.

Simplicity
Simplicity doesn’t mean a dumbed down design. It represents a solid focus on the customer, her needs/goals, and a direct route from A to B.

I was a little surprised to see the Accessibility and Inclusion not specifically called out, but I think we can all agree that those should be a part of each feature.

Sorry, author for photo credit is unknown. It’s not me, truly, I wish.

I am a hoodie fanatic. My husband can’t stand it and had literally phased me out of them several years ago but then they made a fashion resurgence.

However, I won’t just buy any old hoodie. The details are too important (I’m confident other hoodie freaks can relate). Too thin (as in weight)? Forget it. Not fuzzy enough? See ya. Sleeves not long enough? Buh-bye. It has to maintain the fuzzy, comfy appeal through repeated washings. I go so far as to hang dry to keep the fuzz factor from getting sucked away in the dryer (except to fluff). Even if the hoodie has a design or graphic that is the shizzzzz, if the sum of the parts don’t add up after repeated wear, fail. Honestly, I like my Lululemon Scuba Hoodie, but I don’t LOVE it. 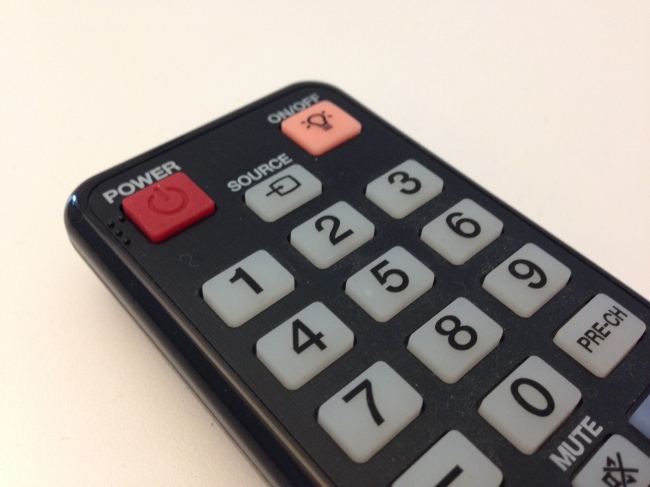 This remote has two buttons, in shades of red, in key positions at the top of the remote.  The one on the left is labeled “POWER” while the one on the right is labeled “ON/OFF.” To a remote novice like myself, my first instinct was to press the “ON/OFF” button to turn the television “on.”  Makes some manner of sense, right? After several failed attempts, I was forced to turn to a fellow co-worker and ask WTH? Turns out, the “ON/OFF” button is to turn the button lights “on” so they’re visible in the dark. (!?!?!?!) Lesson learned, but I still question the: 1) size 2) relative position and placement 3) use of color 4) and labeling applied to the Power and the On/Off buttons. It seems the On/Off button could be given a little less prominence, a different color, and don’t we have technology to make them glow in the dark or react accordingly with sensors?

My husband and I recently attended a wedding in Phoenix, Arizona, and then continued on to Los Cabos, Mexico for a week of sunshine. The travel gave me a unique opportunity to experience multiple TSA screenings. Not that I was intentionally observing, but what else are you going to do if you’re me?

You’d think that the procedure would be identical across the board. ID and boarding pass out, shoes off, belts off, jackets off, pockets emptied, pull out all liquids, gels, creams, lotions in the-way-too-small, clear plastic, quart-sized bag.  Not exactly.

Seattle:
Before allowed to get into the X-ray screening line, boarding passes are reviewed by a TSA agent acting as the line gate-keeper. What they’re looking for, I don’t know. Once it’s your turn, the entire travel party, in this case myself and my husband, can approach the desk where a different TSA agent is waiting for you. This agent first looks at our IDs, and in our case, shined what looked like a black-light flashlight on each passport to ensure it wasn’t a forgery. Then stuff is scribbled on our boarding passes, initialed, and off we went to X-ray screening. Please remove belt, shoes, jacket, empty pockets, pull out all liquids, gels, creams, lotions (3oz or less) in the (way-too-small) clear plastic, quart-sized bag. My husband was pulled aside because he was carrying a small leatherman-esque tool that was supposedly TSA compliant. Tool was approved, blunt plier tips and all.

Because we live in and therefore fly out of Seattle, this security process is our mental model. We’re ready for it. We dress for it, pack for it. We expect it, we anticipate it.

Phoenix:
Before being allowed to get into the X-ray screening line, our boarding passes were reviewed by a TSA agent. (While I wanted to ask the agent what he’s looking for, I’m was a chicken shit because I didn’t want to get put on the Do Not Fly list.) IDs and boarding passes are looked at by different agent where they are authenticated and initialed. Off to the screening portion of the process. And my first mental model first breakdown. We don’t have to remove our shoes or belts. Wah? My husband has already removed his belt in preparation for loading up the plastic bin. I felt kinda like a newbie flyer because we appeared to be the only ones not expecting this non-procedure we were so accustomed to. Husband’s leatherman-esque tool: personally scrutinized but approved. You may pass.

Cabo San Lucas:
Apparently, no matter where you go, someone has to make sure you have a boarding pass before you get to the X-ray screening line. (Maybe that’s what they’re looking for. Do you have a valid seat on a plane.) Then you drink your water, soda, tequila, or whatever prior to going through screening. While this is the same in all airports, it’s a big deal in Mexico because it’s so hot, and almost everyone is drinking something. I watched two people dump water from plastic bottles into a garbage can, but they kept their plastic bottles. A new form of recycling perhaps? Bring it home with you? Or did they think there were no bottles on the other side of screening? But I digress.

X-ray screening began as expected: remove your shoes and belt, empty your pockets. No need to remove your jacket – it’s Mexico. My husband’s pocket tool however, got confiscated. Newly acquired mental model regarding this device being personally scrutinized at X-ray screening, totally busted. We kept asking why? It had no knife, saw, screwdriver and it wasn’t the actual Leatherman that TSA doesn’t allow. (We’re talking a 2″ folding tool here). They kept repeating and gesturing, “you could do this” with a scissor motion and pointing to a picture of the not allowed Leatherman tool on a posted print-out of all the not allowed items. (As if my husband is going to plier and nail file his way through the cockpit door.) We asked why USA TSA allowed it, but not MX TSA? Shoulder shrug. We asked if we could take a photo of the print-out of the not allowed items. Nope, not allowed. Apparently everyone has forgotten about MacGyver, because one could do more damage with a ball-point pen.

San Diego:
Prior to the screening line, there are TWO pre-checks. Apparently, some folks have a pre-check on their boarding passes (whatever that means), which means they go to the left line. Others, like myself and my husband, go to the right line. (Not that it made a difference because I overheard that they still had to get their IDs and boarding passes approved.) Mental model deviation: in San Diego, only one person at a time may approach the TSA agent with her ID and boarding pass. It is not fun to be remonstrated by a TSA agent when you accidentally both approach him. How are we supposed to know? Our model so far is: we can approach together. Don’t point out the discrepancy to the TSA agent. He doesn’t like it.

After going through the ID/boarding pass approval step (one at a time), the same approving TSA agent reminded us to remove our shoes, belt, jackets, empty pockets, pull out all liquids, gels, creams, lotions in the (way-too-small) clear plastic, quart-sized bag. But then the TSA agent actually managing the X-ray line tells us to keep our shoes on, our belts on, and we don’t have to pull out all liquids, gels, creams, lotions in the-way-too-small, clear plastic, quart-sized bag. Mental model, blown. BTW, these two agents are in ear shot of one another.

After all these different scenarios, I have two questions.

Question 1: Why the discrepancies between three different USA airports? (Mexico, you just go with it)

Question 2: Can we at least keep our shoes and belts on in Seattle?